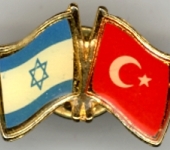 The once-vital relationship between Turkey and Israel is going through a distinctly frosty period. The chill began after the invasion of Gaza earlier this year, which Ankara criticized harshly. But now ties between the two Middle East allies are diving further and some experts are wondering if the relationship is coming to end.

Concern was first raised in mid-October after Turkey indefinitely postponed annual military exercises, reportedly because of Israel’s planned involvement. The exercises — air force maneuvers dubbed Anatolian Eagle — were also to have included the United States, Italy and other NATO countries. The other participating states reportedly pulled out of the exercise after learning of Israel’s exclusion.

Israeli officials also have expressed outrage over a new dramatic series being screened on Turkish state television that shows Israeli soldiers mercilessly killing Palestinians, including one scene of a soldier shooting a young girl at point blank range.

Observers suggest the postponement of the military exercises and the ensuing tension reflect shifts in Turkey’s domestic politics and its foreign policy outlook. “I think the timing [of the cancellation] has more to do with Turkey’s internal and foreign politics,” says Lale Kemal, a military analyst based in Ankara.

“We should bear in mind that the balance of power [in Turkey] is shifting toward civilian authority,” Kemal continued. “Despite the military’s plans for the exercise, which included Israel, the government asked them [military planners] to exclude it.”

Turkey’s Islamist press has strongly criticized Israel’s involvement in previous military exercises, and Kemal believes the liberal Islamic Justice and Development Party (AKP) government was worried about the domestic fallout of this year’s drill. “Had it been up to the military, the exercise would have continued as planned, but the military can’t dictate its policies on the government the way it used to. The equation is changing. We see this in other areas and in the Turkish-Israeli relationship also. The military cannot dictate its positions all the time right now,” she said.

On the foreign policy front, Ankara, for the last few years, has actively sought to establish itself as a kind of regional soft-power broker, working to strengthen relations with neighbors that it has previously kept at an arm’s length, most notably Syria and Iran. Turkish Foreign Minister Ahmet Davutoglu — the main architect of this new foreign policy — and 10 other ministers recently visited Syria for the first meeting of a newly created Strategic Cooperation Council, and to sign an agreement doing away with visa requirements between the two countries.

In many ways, this change reflects a fundamental shift from the period when Turkey and Israel began developing their strategic relationship. At the time, both countries looked at countries like Syria as a common threat. Turkey and Syria almost went to war in the late 1990’s after Ankara accused Damascus of supporting the separatist Kurdistan Workers’ Party (PKK).

Says Suat Kiniklioglu, a member of the governing Justice and Development Party (AKP) and spokesman of the parliament’s Foreign Affairs Committee: “We need to be clear: the strategic relationship between Turkey and Israel is no longer what it was in the late 1990s.”

Bengio believes that the postponed air force exercises may also be the victim of the continuing fallout from the January invasion of Gaza. Davutoglu recently cancelled an upcoming visit to Israel after he learned he was not going to be allowed to visit Gaza. Excluding Israel from the Anatolian Eagle maneuvers might well have been Turkey’s response to that, Bengio says. “I think Turkey is doing this to punish Israel for everything that has happened since Gaza, not because it might hurt its relations with Syria or Iran. The situation is starting to look more like a game of ping-pong,” she said.

During the Gaza fighting, Turkish Prime Minister Recep Tayyip Erdogan accused Israel of “perpetrating inhuman actions that would bring it to self-destruction” and of committing a “crime against humanity.” More recently, Erdogan charged the country with being a “persecutor.”

Ankara initially said that no political meaning should be derived from the postponement of the military exercises, but Turkish officials later altered their tune. “Turkey cannot be seen as being in military relations with Israel at such a sensitive time, when there are no peace efforts, when peace has not gained momentum,” Davutoglu told reporters in a recent news conference. “We cannot ignore what is going on in Gaza.”

Some critics believe that altering the old balance in bilateral relations could damage Turkey’s overall foreign policy interests. “Turkey’s relations with Israel . . . are very vital and should not be a tool for playing domestic games,” political analyst Mehmet Ali Birand recently wrote in a column in the English-language Hurriyet Daily News. “We need to protect the balance as we used to do.”

Israeli officials have already voiced skepticism about Ankara’s ability to serve as an “honest broker,” if talks between Jerusalem and Damascus were to be renewed.

“They are forcing the limits of their ability to maintain relations with both sides,” says Bulent Aliriza, an expert on Turkey at the Center for Strategic and International Studies, a Washington-based think tank. “Turkey has every right to open up to the Middle East and to criticize Israel, but the impression is being developed that Turkey is developing its relationships in the Middle East at the expense of Israel.”

Editor’s Note: Yigal Schleifer is a freelance reporter based in Istanbul.