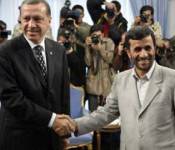 Turkish Prime Minister Recep Tayyip Erdogan paid a two-day visit to Tehran last week, meeting with President Mahmoud Ahmadinejad and other officials. The result was a massive agreement that will allow Turkey to explore Iran’s South Paris natural gas field and carry Iranian gas to European consumers through pipelines via its territory.

“Turkey and Iran have important responsibilities to fulfill as sources of solutions, not problems,” said Erdogan during a press conference.

“Iran has always been a key actor in regional peace and stability because of what it has done and what it will not do,” he said. In addition to exploring and producing natural gas, the two neighbours also agreed to establish an industrial border area, form a joint airline and trade in local currencies to boost economic co-operation.

However, according to experts, there are two major obstacles to those agreements.

“The first one is economic. Turkey has to invest around [3.4 billion euros] for exploring the natural gas fields and transporting the reserves to the consuming countries. The second one is Washington’s opposition to investments in Iran, due to ongoing problems over its nuclear programme,” energy expert Necdet Pamir told local broadcaster NTV.

Daniel Poneman, US deputy secretary of energy, visited Ankara last month, and said Washington opposes any dealings with Iran under the current conditions.

Despite the hurdles, Turkey seems committed to making the signed agreements a reality.

“We did not get any official reaction [from the US]. We are, of course, open to recommendations but we make our decisions independently,” Turkish Energy Minister Taner Yildiz told reporters. “It’s crucial for Turkey to pursue similar agreements with neighbouring countries to supply the demand for natural gas.”

“We have to use [Iran’s] strategic position with regard to its reserves. But if one wants to propose alternatives, we are always open to listen.”

Yildiz said his government will finance the energy investment with future agreements from consumer countries in Europe.

“It’s simply a relation between the producer and consumer. We’ll find the consumers [to buy the Iranian natural gas] and plan our investments accordingly. These are midterm projects that would be actualised in a four-to-five year span,” he said.

“I have traveled to many European countries in recent weeks. I have explored how we could co-operate with them if we carry Iranian gas to the European market. Of course, we’ll also incorporate companies into these deals, just like in the Nabucco project,” Yildiz said, in response to criticism over the agreement.