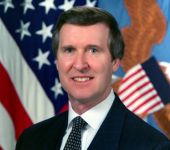 You told The Washington Times in July that you’ve noticed that the leaders of the Gulf States are far more concerned about the Iranian nuclear program than about Israel. What are their concerns and what kind of way forward do they suggest?

The countries in the region are concerned that Iran is an expansionist country; that it will be the dominant player in the Gulf region militarily; and also that its revolutionary zeal will affect the entire region and possibly even destabilize the other states. So, these concerns tend to become the principal discussion matters when I visit the Gulf region. It all depends, of course, on which countries are closest to Iran and what their historic relationships are with it, but virtually all of them are concerned about the power that Iran is accumulating.

When you talk to them, what are their suggestions as to how to move forward?

Well, it depends, again, on which country. There are some that recommend that the United States agree to a compromise with Iran and avoid any kind of conflict at all costs. There are others who feel that conflict is inevitable, given Iran’s dedication to acquiring a nuclear weapon, and they’ve expressed a desire that it happen sooner rather than later. I’m not at liberty to identify which ones favor which action, but there are some who are obviously concerned about the possibility of conflict and are beefing up their own military capabilities. I expect we will see a substantial package of weapons systems going to various countries in the region by virtue of their concern over Iran’s growing military power.

What do you think are the repercussions of this shift in their focus for the region and for U.S. policy?

The administration and the international community are also dealing with a post-election situation in Iran where a lot of Iranians don’t consider the current government to be legitimate. How does that affect U.S. policy?

It has tempered it somewhat. The administration is waiting to see how things evolve in Iran. At the same time there is a countdown taking place. President Obama has indicated that patience is a virtue, but it’s not eternal, and there’s a fairly definitive timeframe in which the Iranians have to respond to diplomatic initiatives. If Iran fails to respond, I think the administration will seek to intensify the sanctions imposed against Iran. It will have to persuade both Russia and China that if the UN resolutions imposing sanctions are to have any meaning, then they have to stand behind them. I think that the sanctions will intensify by the end of September, certainly by December.

You brought up September, that’s when the G-8 has set a deadline, as has the United States, for Iran to respond to an offer of negotiations. What do you think is likely to happen?

The Iranians are masters at delay. We’ve been through this before with President Bush— the setting deadlines; the Iranians saying ’We need three months to study your proposal;’ three months pass and then they reject it and no progress is made. At this point in time, we can no longer allow Iran to defer responding in a positive way without some punitive measures being taken that would intensify their economic hardship; to strengthen those sanctions that would really start to hurt not only their leadership, but the ability of the country to function and prosper economically. This, of course, will require Russia and China to be cooperative as well.

What can Russia do to help on Iran and what should the administration and others be doing to make sure Russia is onboard?

Russia has joined the Security Council in its declaration that Iran should not move forward with a nuclear program. What Russia needs to do, and what Iran needs to hear, is that Russia is prepared to join the other members and stiffen the sanctions against Iranian leadership and companies to create greater hardship.

Under the circumstances such a policy involves both risks and opportunities. The risk is that more sanctions may serve to consolidate Iranian public support for the current regime, which is now in doubt, or at least there’s great dissent over it. That’s a risk that enhanced sanctions carry. On the other hand, if those sanctions are imposed in a selective and discrete way, that hit certain industries which intensify the economic distress that Iran will suffer, that could cause even greater discontent within the Iranian population, which could pose a threat to the regime.

So, there are risks and there are opportunities. I think at this point, given the fact that Iran is on the road to developing nuclear weapons, it’s a risk that needs to be taken.

Another partner in this is the European Union, which led the efforts at engagement for a long time, but the relations between Iran and the European Union have been damaged by the post-elections period. How do you think that is going to affect what happens next?

I think that the brutal crackdown and suppression of dissent has called into question the legitimacy of the Iranian leadership. This only helps the European Union make the case, ‘We’ve seen a demonstration of what this government has done to it’s own people; to allow such a government or regime to have a nuclear weapon is unacceptable. Therefore we’re prepared to join in whatever fashion is necessary to prevent that.’

Much as we saw when Russia went into Georgia, the international reaction to that was very quick. Capital started to take flight; it was very clear that there was, virtually, an across-the-board negative reaction toward Russia. As a result, I think the signal sent and received by the Russian authorities was that they needed to take care that they should not start throwing their weight around and abusing the their power.

I think the same thing is true with respect to Iran. The demonstration, the crackdown, the obvious suppression of votes in certain areas and the stacking of votes in others, has sent a very strong signal that this is a regime that is not to be trusted.

It sounds like you’re saying that the window of opportunity for engagement has either shut or may likely shut soon.

It hasn’t shut yet, but that’s the signal that has to be sent, that window is closing. There has been enough stalling; we’ve witnessed this for years now. You’ve operated a covert program for seventeen years and since its exposure there has been very little progress made. We’ve had inspectors in, inspectors out, with very little cooperation coming from the Iranians in the last year. I think it’s pretty clear what’s taking place: there has been a policy to delay, obstruct, obfuscate and then wait for the U.S. and others to either lose focus or have the dynamic slow down due to the economic interests that either Russia or China may pursue that will serve to undercut the pressure. So the tactic is quite clear and from the U.S. and others’ position, that has to be rejected.

I think the window is open, but not much longer. By the end of September, if there’s not a positive reaction coming out of Iran, you will see an intensification of the sanctions. And there is always Israel, and it is not going to sit indifferently on the sidelines and watch Iran continue on its way toward a nuclear weapons capability. So that is a factor that needs to be considered. Whether anyone thinks that that is a desirable option or not, the fact is that the Israelis are looking at it very closely and they will make their own calculation as to whether or not they can live with a nuclear-armed Iran.

Do you have anything else to add?

The United States’ position is that we believe that military options are not desirable, but they’re not off the table. Hopefully Iran can see the benefit of cooperating; facing on the one hand, sanctions being raised, and on the other, economic opportunity. The Russians have offered an option that if Iran really wants just nuclear power for civilian purposes, the West is prepared to cooperate and support that. You have the Russian proposal to enrich the uranium on Russian soil—the Bush administration endorsed that concept. If they want nuclear power for civilian purposes, they will be able to achieve that with the support of the international community. If they want it for military purposes then they’re going to have to face some very severe economic times and possibly—again a remote possibility, but nonetheless a possibility—that it could come into conflict with various countries.

“This article was published by the Center for American Progress“