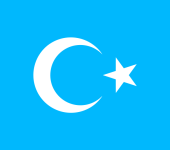 Blood in the streets: Brutal rioting broke out this week in China’s Xinjiang region between members of the Uighur ethnic group, Han Chinese, and government security forces. More than 156 people were killed in the riots in the capital of Urumqi, which began after police quashed a protest by students over ethnic discrimination. China has threatened to execute the leaders of the uprising — while intervening to protect the Uighur community from ethnic reprisals. The violence has briefly focused global attention on one of the world’s bitterest, but least-understood, ethnic conflicts. Above, an unconscious protester is pulled away from the fighting on July 7.

Meet the Uighurs: The majority of Uighurs live in Xinjiang, the massive western “autonomous region” that accounts for nearly a sixth of China’s land area. At its height in the ninth century, the Uighur empire stretched from the Caspian Sea into eastern China. The Uighurs also managed to establish independent republics twice during the 20th century before being annexed by the People’s Republic of China in 1949. Above, a Uighur man sells knives in the 2,000-year-old city of Kashgar on April 3, 2008.