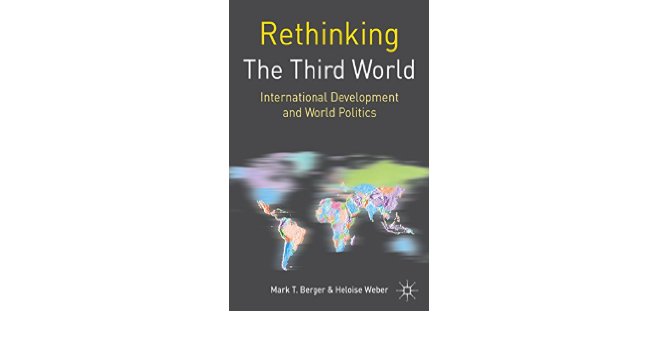 In their wide-ranging, erudite, and thick overview of the origins and evolution of “Third Worldism”, Mark T. Berger and Heloise Weber revisit our most fundamental assumptions about international development and its complex connections to security. The authors accomplish this by providing a chronological account of the idea of “the Third World” and the various forms that it has taken since the end of the Second World War. The book’s point of departure is the process of decolonization and the hopes of new nations to achieve modernity on their own terms. If Third Worldism provided an ideological and political space in the international system for these newly-decolonized nations, then why did these young nation-states fail to achieve their main goals? More importantly, with the relative decline of Third Worldism, what explains the continuing ineffectiveness of international development projects?

To answer these central questions, the authors skillfully synthetize the vast literature in multiple yet connected subfields including development economics, post-colonial studies, and ‘nation-building’ and ‘state-building’ theories. They argue that the modern framework of international development, with its ontological assumption that nation-state is the ultimate unit of analysis and the “object of development”, fails to address the transnational and global nature of ‘state failure’. The book goes beyond the interpretation of global modernity as a merely technological and economic network of interdependence that excludes the periphery. The authors argue that the periphery, or the Third World, have not been simply left out, rather, “they have experienced its negative (or dark) side” (p. 144). According to Berger and Weber, while Third World leaders correctly diagnosed the global and transnational causes of their ‘underdevelopment’ in the early years, their fixation on ‘national economy’ based on a ‘stages-of-growth’ temporal logic dramatically decreased the potential impact of their economic policies. Although Third Worldism declined after the end of the Cold War, their fundamental operational assumptions about international development have proven to be persistent.

The book is organized chronologically, encompassing the late colonial to post-Cold War era. In their narrative, the authors attempt to keep the balance between two elements of their argument: on the one hand, they recount a history of ideas and intellectual shifts regarding the Third World and the question of modernity. In this sub-narrative, they introduce the origins of “the idea of progress”, civilizing missions, capitalist and socialist modernization theories, state-centered development, and the neo-liberal agenda. On the other hand, the book emphasizes the material conditions which have constituted the context for concrete practices of modern national and international development. In this vein, they “draw more attention to the social crises, colonial and imperial expansion, and revolutionary politics which were central to modern world history” (p. 22). Therefore, through a systematic analysis, the book shifts the explanatory level of analysis from nation-state to “the broader history of unequal global social relations” (p. 8). As a result of this approach, their ontological assumption approximates that of the world-systems and dependency theories.

Its main arguments aside, Rethinking the Third World is an interesting and timely read. It is successful in addressing a wide-ranging history of ideas and social changes in vast and often-disregarded areas in the international system –Latin America, the Middle East, and Africa. The synthesis and cross-fertilization among different subfields enables authors to pose thought-provoking questions and insights. For example, in multiple instances, the authors problematize the commensurability between national interests and elites’ interests in the Third World and less developed countries. To what extent do the national interests of these nation-states overlap the interests of their political and economic elites? They also cast doubt on the concept of fixed juridical sovereignty, as not a stabilizing factor, but as a source of intra- and inter-state conflicts in the contemporary international relations. If one accepts the dominant argument that war-making generates the processes of state-making and ultimately nation-building, then “warfare between states no longer works to ‘create’ the nation-state system” (p. 145) due to the de jure sovereignty provided by the UN.

Despite the strength of the narrative, what the authors suggest as a “regional development-security framework” in Chapter 6 still needs to address some of its problematic assumptions. First and foremost, if the Third World leaders were correctly aware of the international dimensions of their domestic social and economic problems, then why did most of their transnational efforts prove to be fruitless? After all, Nasser formed the United Arab Republic and made substantive attempts to unite the Arab world, the Non-Aligned Movement (NAM) was established by the Third World leaders, and the OPEC did become functional during the 1960s and 1970s. According to the book, one possible answer to this question might refer to the Cold War dynamics and the international geopolitical competition which rendered these variations of regionalism and Third-Worldism ineffective. If we accept this answer, then the authors must clarify why their proposed form of regionalism can prove to be resilient when confronted by the similar international and/or transnational geopolitical competitions in the periphery. Will the conceptual shift from nation-state to international/transnational level of analysis be sufficient to overcome other geopolitical and geo-strategic calculations in the contemporary international relations? In short, the security component of the “regional development-security framework” is not as well-rounded as the development module.

In a world where the core principles of the modern nation-state system are increasingly under pressure by non-state and some state actors, any discussion which problematizes our assumptions about sovereignty, development, and security should be encouraged. In this respect, Rethinking the Third World is a critical and fascinating starting point to stimulate such debates.

Next post Book Review | Religious Difference in a Secular Age