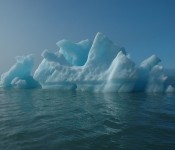 Senior negotiators at a U.N. conference in Barcelona say a legally binding environment treaty will be delayed. In the final day of a weeklong conference, world leaders say a global climate treaty might be postponed by up to a year.

Delegates have been in Barcelona all week to hash out a plan that would pave the way for 192 nations to sign a legally binding international climate deal next month.

But now executive secretary of the U.N. Framework Convention on Climate Change Yvo de Boer says any decision taken next month in Copenhagen will instead be “morally binding.” And a legally binding deal may take another year to put in place.

Speaking in India, Sweden’s prime minister Fredrik Reinfeldt told journalists the setback comes because some countries are not politically ready to sign a deal.

“What we hear is that the kind of legally binding agreement that we, for instance, did inside the European Union, will probably not be possible since some of the countries like the United States say we do not have the support in our congress to make a ratification on an international agreement,” he said.

But speaking from Barcelona, Hugh Cole of the charity group Oxfam, says European leaders need to focus on their own lack of political will.

“As far as we’re concerned they’re basically hiding behind the United State’s lack of ambition,” he said.

He says the mood at the conference today is one of disappointment. And he says it’s developing countries that will be worst hit by this delay.

The European Union has said that developing nations will need almost $150 billion in aid per year by 2020 to deal with climate change.

Cole says there is still potential for a good climate deal in Copenhagen next month.

“What is currently being discussed is that you would have a second commitment period of the Kyoto Protocol, which doesn’t currently include the United States, and then you would have a separate agreement which would bind the U.S. into its own omission reduction targets,” he said.

The Kyoto Protocol is a legally binding treaty agreed to by 37 countries in 1997. The current goals of the treaty end in 2012.