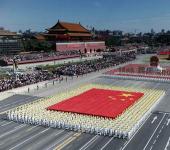 Every country is shaped by its history, but countries fabricate and rewrite their histories, too. The story of how we became who we are needs to accommodate our sense of tribal solidarity and accomplishment. Our triumphs and virtues are exaggerated. Our villains externalized, and our failings covered up. All this makes the study of history potentially insurrectionary, but hugely valuable. Good historians encourage us to be honest about ourselves. They destroy our self-delusions.

This is especially true of our flawed heroes, as we see today with the Chinese Communist Party’s treatment of Mao Zedong. Sixty years ago on Oct. 1, Mao stood on the rostrum of Tiananmen, the Gate of Heavenly Peace in Beijing, and declared the founding of the People’s Republic. That moment marked the end of years of war and terrible hardship. The revolution had been won through blood, sacrifice, heroism, the mistakes of enemies and the manipulative assistance of Stalin, who purported to be a friend. The decades of rapacious war lords, greedy imperialists and Japanese invaders were over. China could stand up, though much misery still lay ahead as Mao’s tyranny put down its roots.