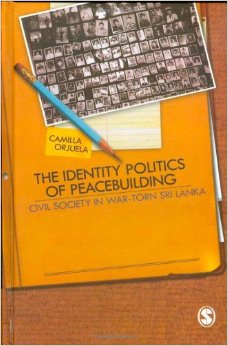 The common understanding of civil society engaged in peace efforts is that it is homogenous in its views, is peaceful, independent, and influences positive changes in behaviour. But as history has shown, civil society is not always as we perceive it, and situations within which civil society functions are extremely complex, more so in countries which have chequered histories, thus peacebuilding is not easy. Civil society itself is complex, and representative of a wide range of people who have  many identities, needs, demands and prejudices.

In this book, Camila Orjuela analyses the positive contributions, the challenges,  the negative aspects related to civil society, and the important role identity plays in its actions. To do this, Orjuela has dug deep into the murky depths of Sri Lanka’s modern history to put things in context, explain the situation in the country and its complexities, as well as provide an understanding of the formation of early civil society institutions, their linkages to religion, and efforts to organize and bring peace in a country wracked by a long drawn out and violent conflict. The author shows great depth of understanding and analysis of the history of conflict in the country, and knowledge of civil society and its myriad activities, successes and shortcomings in Sri Lanka.

A synopsis of the chapters is provided below. The introduction and first chapter of the book sets the stage for a closer look at identity politics, civil society and peace in Sri Lanka by defining some aspects of, or the misconceptions related to, these groupings and provides a brief background of the conflict and efforts to bring peace to the country. It also sets out the approach and methodology adopted in gathering and analysing material for the book.

The second chapter of the book attempts to understand what civil society can do for peace, by exploring the concept of ‘civil society’ and its roles; including the prevention  of armed conflict, peace roles during war, participation in peace processes and post-war reconstruction and reconciliation. Chapter three is a study of the importance of identity in both conflicts and peacebuilding. It shows how groups strive to create exclusionist identities as being distinct from the ‘other’ for justifying conflict, or to build peace. The chapter examines the idea of creating group identities that are not premised on the maintenance of an enemy other, not tied to ethnicity or a nation state but by alternative identities based on cosmopolitanism and multiculturalism.

Chapter four is one that seeks to put the focus of the entire book in context, by studying the history of identity politics in the island nation. It starts by looking at how society identified itself during its colonial past through caste and ethnicity, explores the divisive factors related to ethnic polarization in post-colonial governance structures, the domination of one group above the other, as well as domination within such ethnic groups. This chapter also focuses on conflict resolution efforts in Sri Lanka, as well as the ethnic polarization of society itself, which has led to more segregation and creation of new conflict lines.

Chapter five of the book is a study of civil society in Sri Lanka, from the pre-colonial period when communities organized themselves to work in temples and irrigation systems, through to colonial and post-colonial organizations that developed; beginning with Christian missionary activity for educational and social work, and including Buddhist and Muslim organizations, cooperative movements and unions, to community based and non-governmental organizations of contemporary society. The chapter also analyses the composition of civil society groups in modern Sri Lanka, motivations and identity politics, as well as the ability to draw mass support based on nationalistic, divisive, or peace messages. The author attempts to explain the challenges faced by these groups, their biases, interests, and links to and dependence on the aid industry. In analysing civil society in Sri Lanka, the author’s research showed that while many individuals and organizations were committed to peace in Sri Lanka and progress made in several areas, civil society advocating for peace lacked unity and a coherent policy.

The sixth chapter in the book is a study of why civil society peace work matters. It shows and analyses how civil society efforts have led to changing attitudes or influencing key actors and belligerents: emboldening those convinced that negotiation and coexistence is the way forward and those that advocate for peace, cross-ethnic dialogue and peace work, mobilization and peace work during the conflict as well as during the ceasefires. The author also finds that in times of conflict, civil society advocacy or gathering and documenting rights violations were used by donors and international representatives in pressurizing the parties to the conflict to end such practices.  It also finds that at times when civil society is unable to influence national governments and other actors, its international links helped influence other states and international organizations to do this. The author also makes the point that despite many constraints, civil society has the ability to mobilize, spread information and influence a wide range of actors.  The chapter also points out an often overlooked point that civil society is sometimes seen as a competitor to political groups who also draw on the same population groups for support.

The final chapter of Orjuela’s book is an analysis of the identities of peace organizations by deconstructing their focus of intervention. These include:  ethnic identity and divisions, peace or human rights issues and their sometimes distinct separation, class and rural or urban divides, religious affiliation, gender, politics, and individuals personal experience and prejudice.

Civil society is often seen as having a positive influence on peace efforts, and Orjuela provides ample evidence of this, including through the use of interviews. She also picks out and highlights the aspects of civil society that are destructive and instigators of conflict, elitist or exclusivist, or driven by the agendas of its donor base. Orjuela’s book also highlights the complex nature of societies, the broad understanding of peace, the challenges faced by populations and other actors, and the situations in which civil society actors work.

The strength of this book, however, lies in Orjuela’s ability to use the Sri Lankan situation to highlight all aspects of the work and influence of civil society that transcends national boundaries, as well as the important role identity politics plays in the broader context. The book uses the Sri Lankan example to show how identity politics is not exclusive to warring factions, that civil society is diverse, and how in its various manifestations, can either contribute to peace or conflict in a country. To do this, she delves deeper to look at a cross-section of individuals that make up civil society in a bid to understand the composition of these groups, and identify what makes each segment of society behave the way it does.

The book also highlights civil society’s challenges in not being able to reach a common consensus or unity, an inability to draw on large numbers of individuals, change the thinking of those for war instead of only emboldening those who oppose the conflict, and its limited impact on the national stage. These are examples of what donors, governments and other entities do not consider when engaging with civil society working on peace efforts.

The book, however, could have benefitted from a more detailed analysis of civil society, its influence on society, and its positive and negative aspects from a country with a similar history and situation as Sri Lanka. This could have helped draw parallels in understanding the similarities, or dissimilarities of civil society across borders, and assist practitioners in identifying what works, or not in similar circumstances. While it provides valuable information and critical analysis of civil society and its work, its extensive focus on Sri Lanka, might, unfortunately, deter those not interested in the country from reading this extremely informative book.

This book should, however, be vital reading material for academics, researchers, donors and aid agencies in understanding the composition and dynamics of civil society and how it can contribute to peace or conflict in any country. 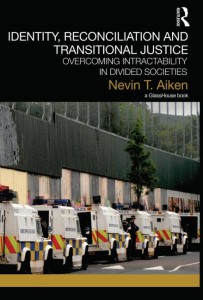 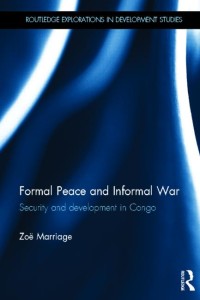